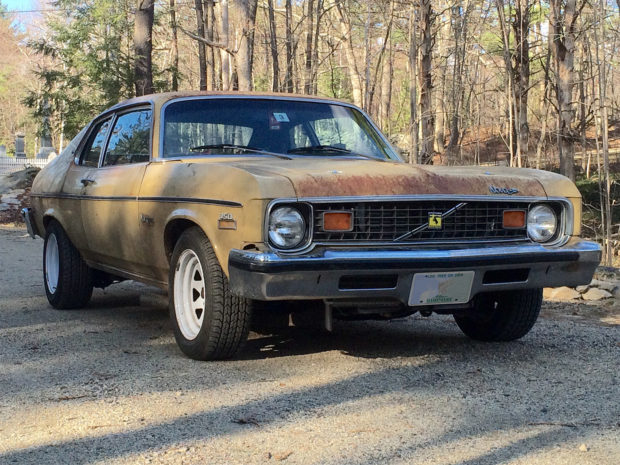 Sometimes an idea for a project comes out of nowhere. It doesn’t matter how difficult or unusual it might be because once that idea takes hold, it’s all you can think about. Robin D’Agostino had an idea of combining two two of his favorite automotive companies into one really unique project. Although there were plenty of negative opinions he never let it stop him. 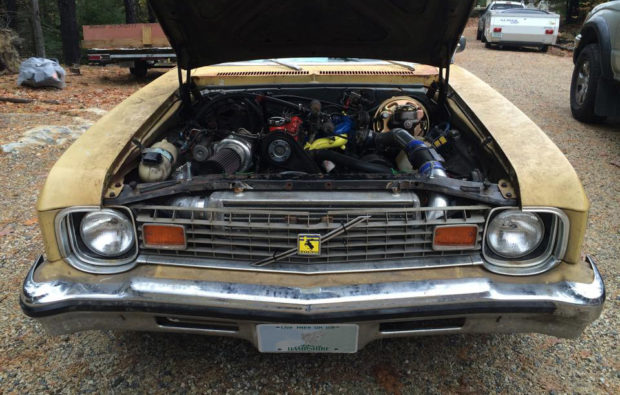 Robin has always been part of a Chevy family. One of the last Chevy vehicles his Father owned was a 1989 Caprice Police cruiser. After the engine broke in the Caprice his Father’s decided to buy another car. His choice came down to either a 1996 Volvo 940 turbo wagon or a 1996 Impala SS. Robin hoped his Father would choose the Impala but he chose the Volvo. Robin would joke with his Father for choosing the the small turbo inline-four over the big torquey V8.

Several years later when Robin got to choose his own vehicle he built a 1st generation S-10 truck with a V8 and rear mounted turbo. It was a blast to drive and Robin loved the turbo feel but it wasn’t very practical and the attention it gained from the Police got tiresome. So he decided his next vehicle needed to be a sleeper with a turbo inline-four from the factory. 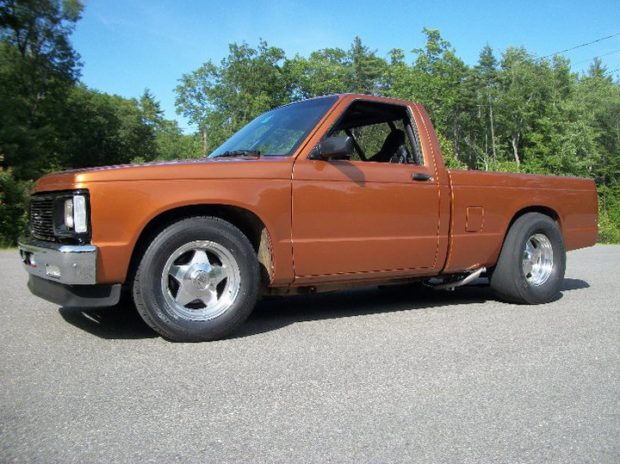 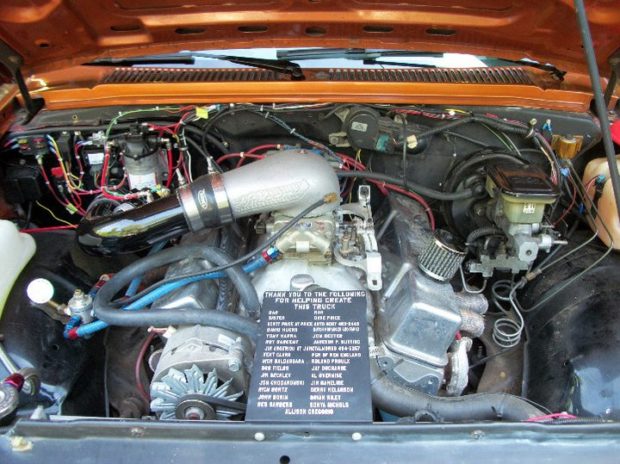 Robin started researching a lot on Volvo “Redblock” engines found in 7 and 9-series. After realizing their potential he took back everything he said to his Father about his Volvo. He settled on a 1990 Volvo 740 wagon that checked off all his requirements. It was practical, roomy, nice turbo power and the signature boxy look that had grown on Robin. 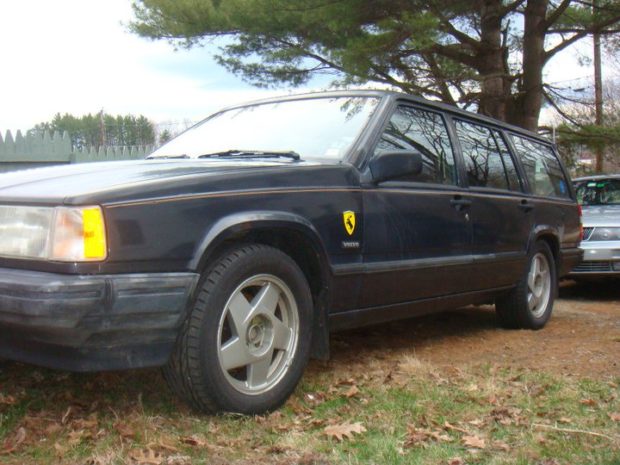 After seeing a Nova on Craigslist Robin casually joked with a coworker about how interesting it would be to build one with the turbo inline-four out of his 740 wagon. A week later the same coworker informed Robin of a 1973 Nova rolling chassis a couple of hours away. Robin had always loved the look of a Nova and especially the fastback model ever since he was young. After talking to the owner it was in Robin’s garage within the week. 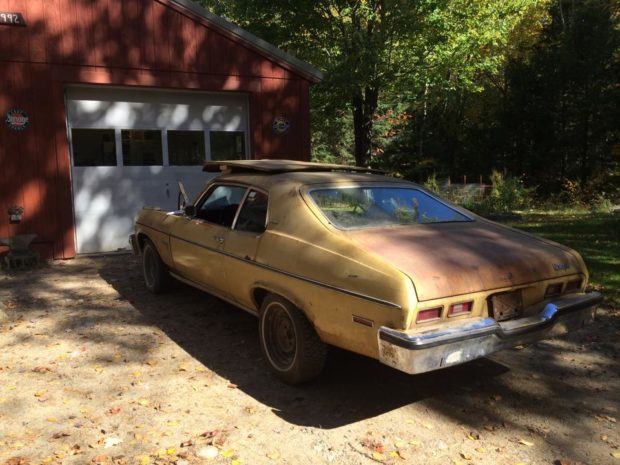 In Robin’s eyes the Volvo Redblock felt like a natural choice because it’s Sweden’s version of the small-block V8. You can find the engine in many Volvo models and generations. You can even find them powering boats. 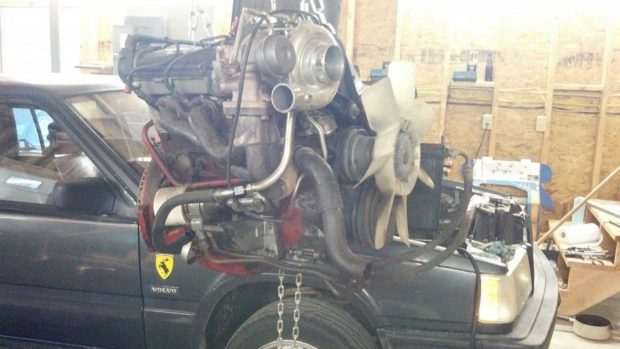 Robin soon removed the 2.3 L B230FT “Redblock” inline-four out of his Volvo 740 wagon and installed it into the Nova using urethane small-block Chevy mounts connected to custom steel mounts made by Robin. The oil pan needed to be notched to clear the Nova steering linkage. 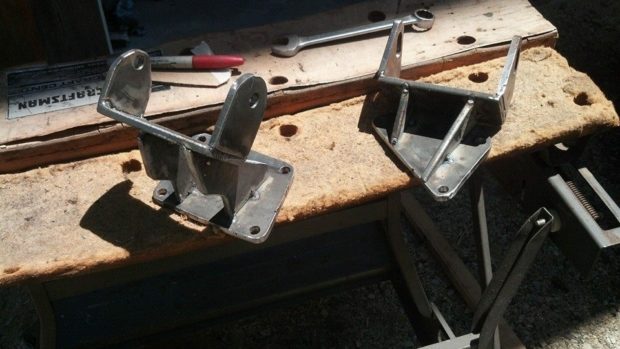 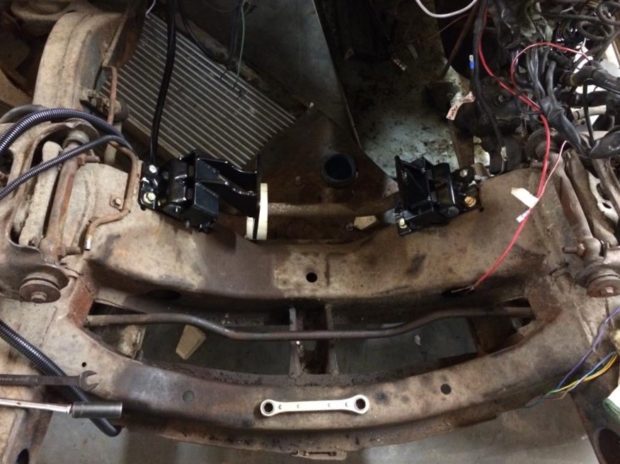 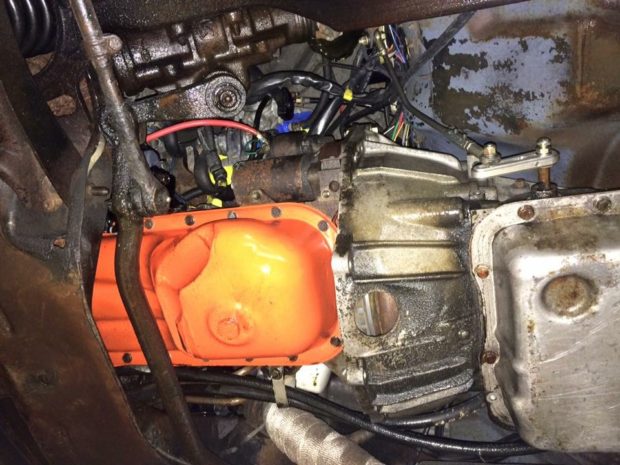 The engine produces about 275 horsepower at the wheels thanks to a RSI stage 2 camshaft and hybrid Garrett T3/T4 turbocharger making 18 psi of boost. Boost is controlled through a Tial 38 mm waste gate and AEM Tru-Boost. The engine is fed through a modified Bosch LH2.4 fuel injection system with white Bosch fuel injectors from a Pontiac GTP. 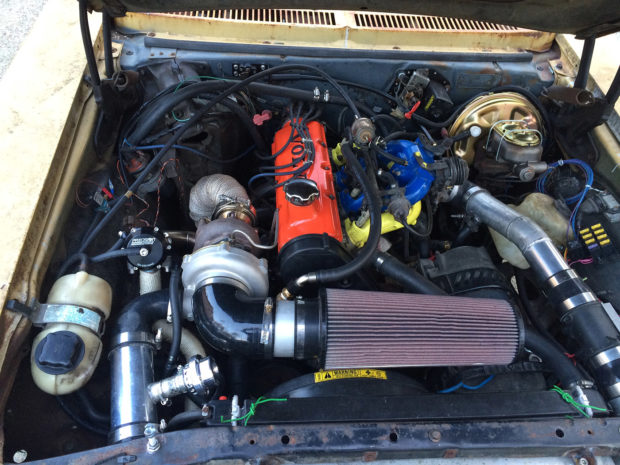 Robin finished the engine with a color scheme that celebrated both companies. The engine has orange powdercoated valve covers and oil pan. The intake was painted blue and yellow in a tribute to Sweden for building such great cars. 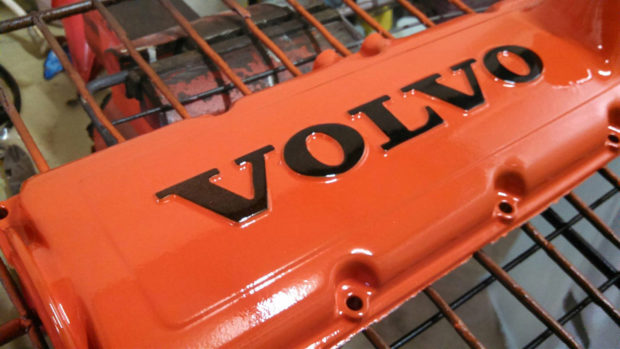 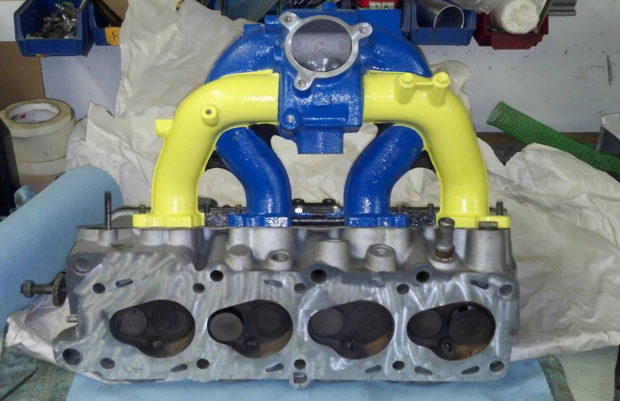 Behind the engine sits a GM 4L60E four-speed automatic transmission from a 1998 GM 1500 truck. The transmission is controlled using a Simple Shift transmission controller. The transmission was connected to the Volvo engine using an adapter plate made in Sweden. The only modification needed was to remove part of the bellhousing for the crankshaft position sensor. 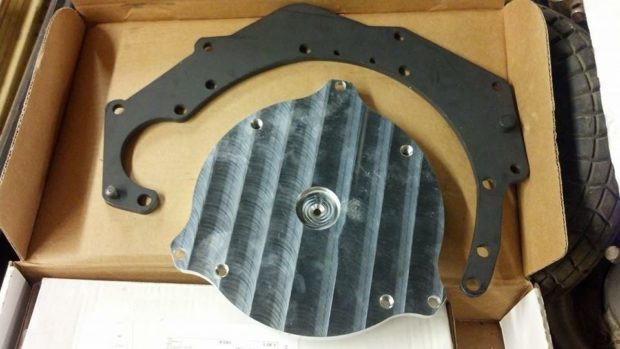 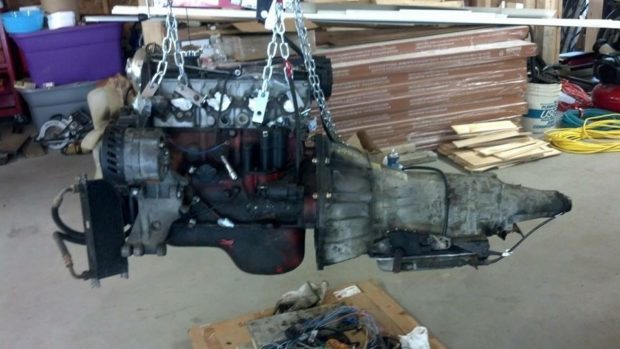 The rear end is still the factory GM model with 2.63 gears. This is nice when cruising at 75 mph on the highway but otherwise is pretty weak until the engine gets up on boost. One of Robin’s future modifications will be replace the diff with a LSD model with higher gears. 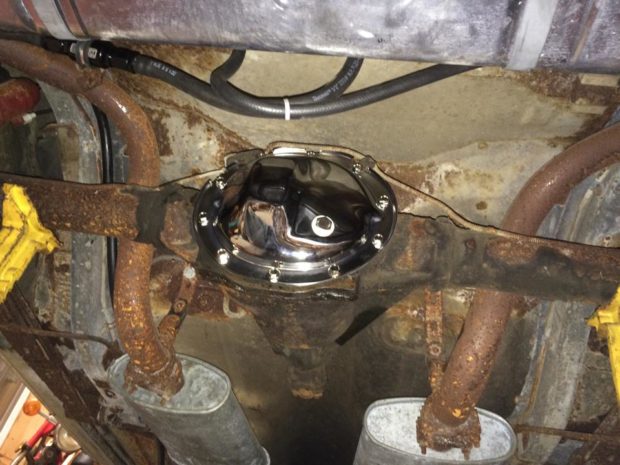 The driver side exhaust was flipped and shortened to meet up with the Flowmaster 3″ into dual 2.25″ Y-section. Robin also installed Summit Racing 3″ electric exhaust cutout to give the exhaust a louder sound at the flip of a button. 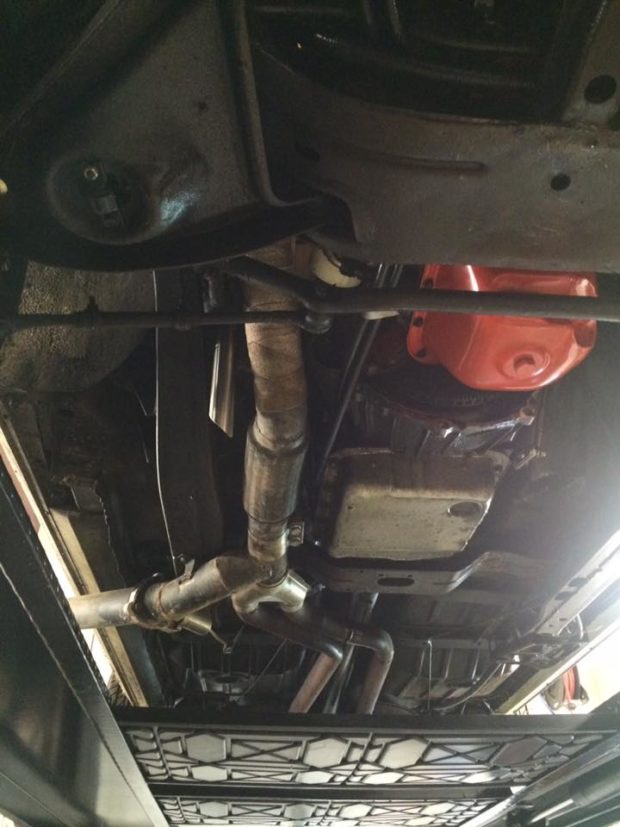 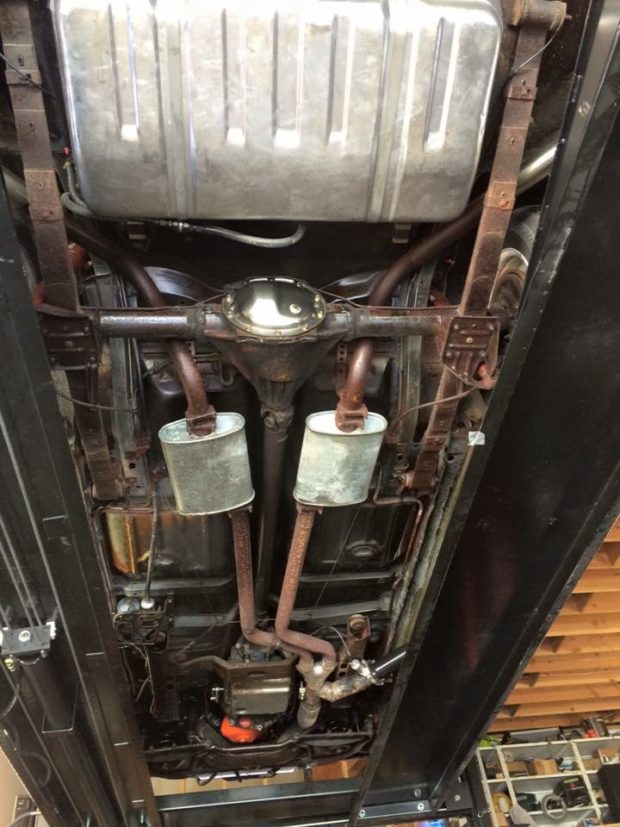 To keep the gauge console as clean as possible, Robin installed a Summit Racing digital gauge panel into the factory Nova console. 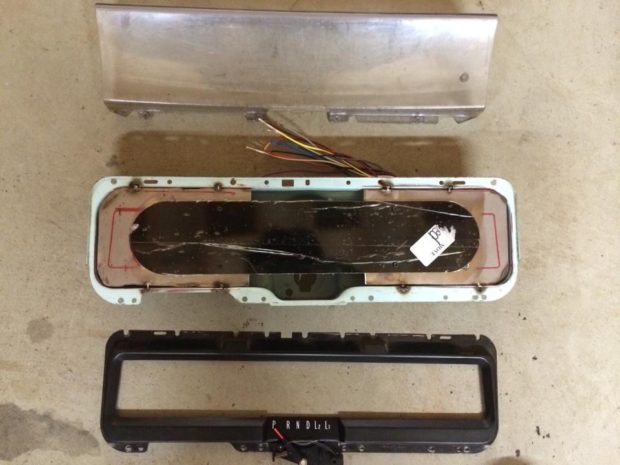 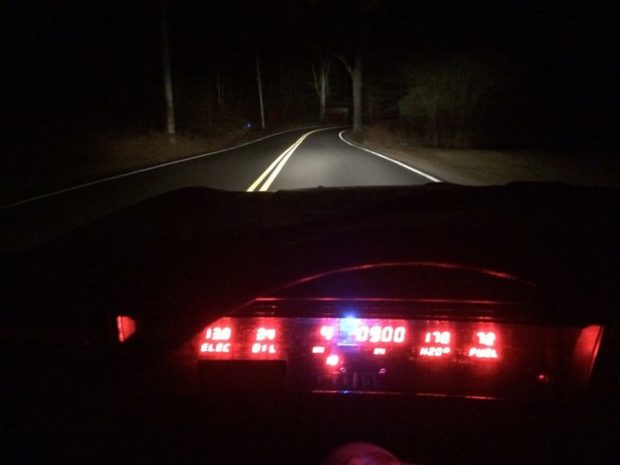 From the beginning of the project Robin made a point to keep the Nova looking as stock as possible. The only clue on the outside that there is something different is the Volvo slash on the grill. 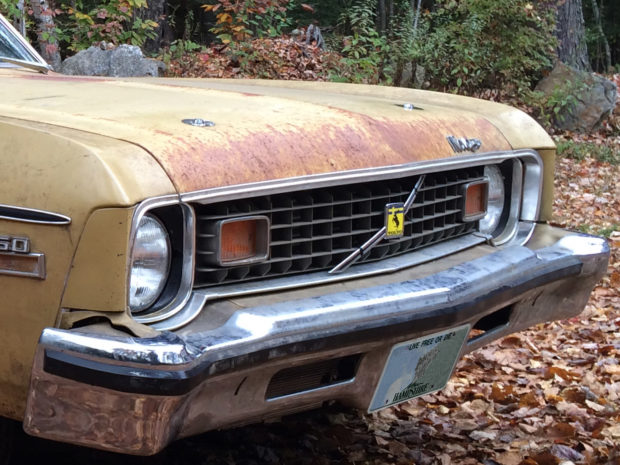 Future plans for the Nova include RSI stage 1 camshaft, Grant steering wheel, Simple Shift paddle shifter, and limited slip diff with 3.42 gears. Robin also plans on replacing the factory truck converter to one with a higher stall. This will help performance by allowing the turbo to spool sooner. 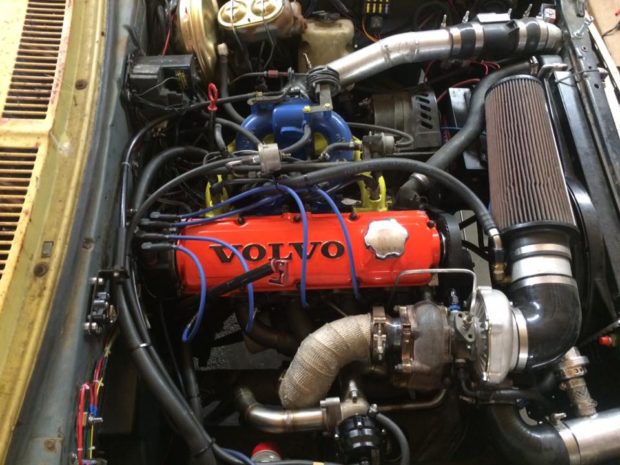 Robin’s Nova may have started with a wild idea but it has grown into something more. Robin remembers his Father telling him how great it would to own a fastback Nova some day. The Nova became not only a combination of his interests but also a great reminder of his Father.