It has been almost four months since the guys at Bad Obsession Motorsport released their last episode of Project Binky. In case you haven’t been following Project Binky involves installing a Toyota Celica GT-Four drivetrain into a modified Mini chassis. In this episode they work on the controls, pedals, and steering. Source: Bad Obsession Motorsport 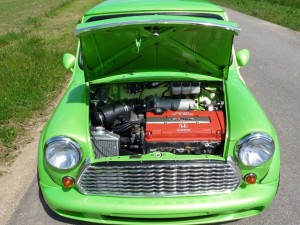 This very nice Mini was built a Germany company called GRacing. They specialize in swapping Honda engines into Minis. This particlular one runs a Honda B18C. Here is a Facebook video recorded from the back near the exhaust as it runs. Source: GRacing Facebook album

The project involving a Toyota Celica GT-Four powered Mini continues with episode nine. In this episode they finish the coachwork, a method of removing excess engine heat through the metal, and an amazing power system to open and close the flip-front. They also finally begin work on the interior. Source: Bad Obsession Motorsport

The project involving a Mini being powered by a Toyota Celica GT-Four drivetrain continues with episode eight. In this episode they work on improving the doors. This involves adding new skins, repairing the rust around the bottom, and adding a support. They also build an amazing support structure so the front body panels will flip forward … END_OF_DOCUMENT_TOKEN_TO_BE_REPLACED

Leave it up to a group called the Jet Pac to take some of the smallest cars ever made and stuff turbojet engines into them. They currently race a Mini with two engines and a Peel Trident with a single engine. The Peel Trident just set a record for the fastest Peel with a quarter-mile … END_OF_DOCUMENT_TOKEN_TO_BE_REPLACED

The project involving swapping a Toyota Celica GT-Four into a Mini continues with episode seven. In this episode we find the team finishing the chassis mods and installing electric windows and locks. Source: Bad Obsession Motorsports